The climate in Greece is predominantly Mediterannean characterized by warm to hot dry summers and mild to cool wet winters. However, due to country's unique geographic location, Greece has remarkable range of micro-climates and local variations. Greece has extended periods of sunshine throughout most of the year that's way it is an ideal destination for vacations not only in summer but also in spring and autumn. 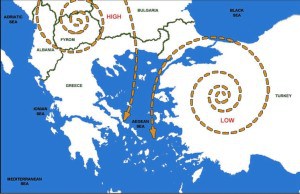 The most well known local winds in Greece are the etesians also known as meltemi. These winds blow roughly from May to October with their highest frequency being recorded in July and August. They keep temperatures in the Aegean Sea lower than the respective ones found in Ionian Sea or mainland Greece.

Meltemi winds, are a strong dry north winds. They are at its' strongest in the afternoon and often they die at night but sometimes they last for days without a break. They can reach up to 7-8B. Meltemi ensures, most of the time, a good steady sailing wind making Aegean Sea apreferred destination for many leisure sailors.
Below you can see a detailed weather forecast for Saronic Gulf and Cyclades respectively: