The Cyclades (/ˈsɪklədiːz/; Greek: Κυκλάδες, [kukˈlades]) are a Greek island group in the Aegean Sea, southeast of mainland Greece and a former administrative prefecture of Greece. They are one of the island groups which constitute the Aegean archipelago. The name refers to the islands around (κυκλάς), the sacred island of Delos. The Cyclades is where the native Greek breed of cat (the Aegean cat) originated. 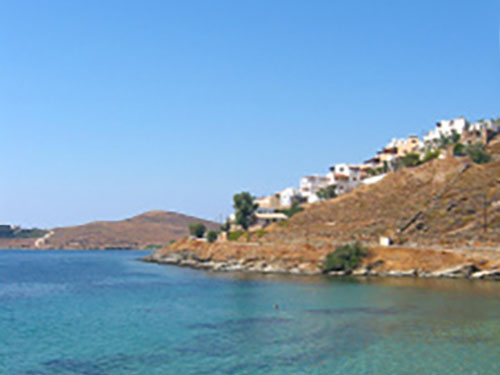 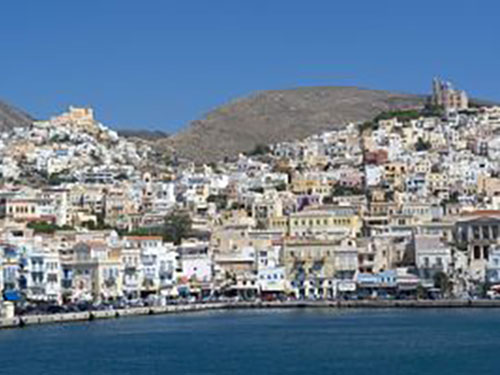 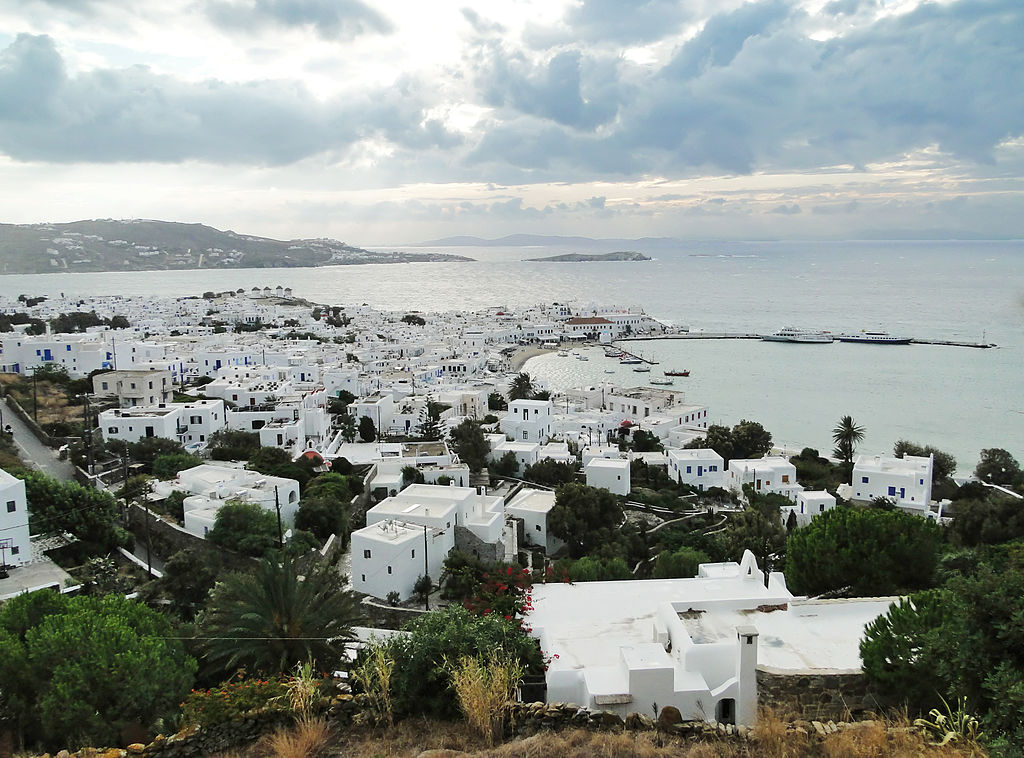 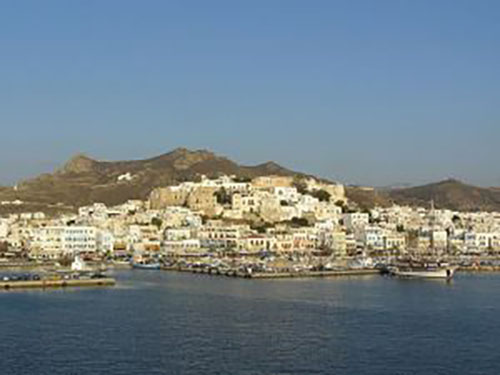 Naxos,at 429 km2, is the largest of the Cyclades island group in the Aegean. It was the centre of archaic Cycladic culture.

The largest town and capital of the island is Chora, with 6,533 inhabitants. Naxos is the most fertile island of the Cyclades. It has a good supply of water in a region where water is usually inadequate.

Mount Zeus (1003 metres) is the highest peak in the Cyclades, and tends to trap the clouds, permitting greater rainfall.

This has made agriculture an important economic sector with various vegetable and fruit crops as well as cattle breeding, making Naxos the most self-sufficient island in the Cyclades. Naxos is well known within Greece for its cheese, potatoes and Kitro, a local lemon-citrus spirit.

Amorgos is the easternmost island of the Greek Cyclades island group, and the nearest island to the neighboring Dodecanese island group.

Along with several neighboring islets, it comprises the municipality of Amorgos, which has a land area of 126km ² and a population of approximately 2.000 inhabitants.

Due to Amorgos' position opposite the ancient beaches of Ionian towns, such as Militos , Alikarnassos, and Ephesos, it became one of the first places from which the Ionians passed through to the Cyclades Islands and onto the Greekmainland.

The island was featured in Luc Besson's film The Big Blue. Agia Anna and the monastery of PanagiaHozoviotissa can be seen in the film. 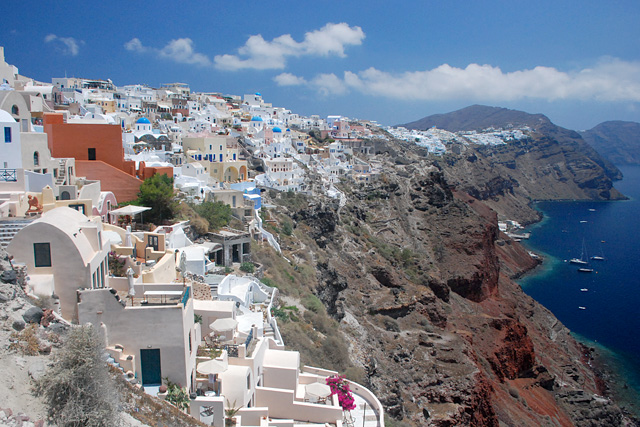 Santorini, an island in the southern Aegean Sea, is the largest island of a small, circular archipelago which bears the same name and is the remnant of a volcanic caldera.

It forms the southernmost member of the Cycladesgroup of islands, with an area of approximately 73 km2 and a population of 16.000. The two main sources of wealth in Santorini are agriculture and tourism. Santorini remains the home of a small, but flourishing wine industry, based on the indigenous grape variety.

The traditional architecture of Santorini is similar to that of the other Cyclades, with low-lying cubical houses, made of local stone and whitewashed or limewashed with various volcanic ashes used as colours.

The unique characteristic is the common utilisation of thehypóskapha: extensions of houses dug sideways or downwards into the surroundingpumice.
These rooms are prized because of the high insulation provided by the air-filled pumice, and are used as living quarters of unique coolness in the summer and warmth in the winter. 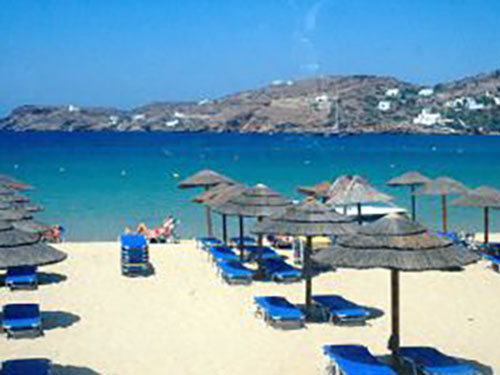 Ios is a hilly island with cliffs down to the sea on most sides, situated halfway between Naxos and Santorini. It has an area of 109km² and a population of approximately 2.000 inhabitants.The Port of Ios is at the head of the Ormos harbor in the northwest.

From there the bus or a 15-minute walk up the steep donkey path takes you to the village, known as Chora.

Chora is a white and very picturesque cycladic village, full of stairs and narrow paths that make it inaccessible for cars of any kind.

Today, the main path through this village is completely taken over by restaurants, boutiques, bars and discothèques.

The island has been catalogued as the “queen of the young tourists” although Ios has a lot to offer to visitors of any age. 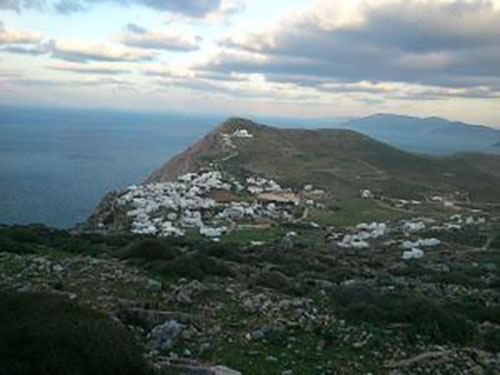 Folegandros is a small Greek island in the Aegean Sea which, together with Sikinos, Ios, Anafi and Santorini, forms the southern part of the Cyclades. Its surface area is about 32 km² and it has 765 inhabitants.

It has three small villages, Chora, Karavostasis, and AnoMeria, which are connected by a paved road. Folegandros' landscape is varied, and includes tall cliffs and a large cave.

The "capital" of the island, Chora, is built on the edge of a 200-metre high cliff.

There you can see the castle built by Marco Sanudo which is very picturesque.

The castle is of same type as the other castles in Cycleades with the walls of the joined houses around forming its walls.

Milos is a volcanic Greek island in the Aegean Sea, just north of the Sea of Crete. Milos is the most southwestern island in the Cyclades group.

Its’ area is 160.147 km² and has approximately 5.000 inhabitants.The island is famous for the statue of Aphrodite (the "Venus de Milo", now in the Louvre), and also for statues of the Greek god Asclepius (now in the British Museum) and the Poseidon and an archaic Apollo in Athens.

The harbour town is Adamantas; from this there is an ascent to the plateau above the harbour, on which are situated Plaka, the chief town, and Kastro, rising on a hill above it, and other villages.

Milos is famous for its’ beaches as there are more than 70 around the island. 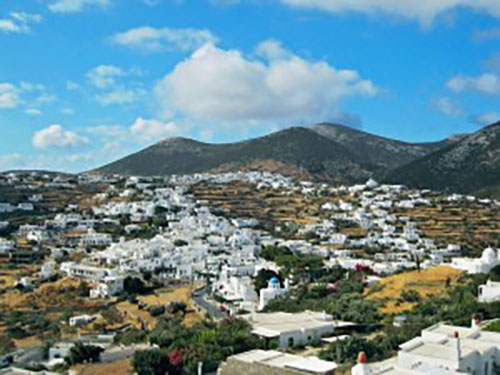 Sifnos lies in the Cyclades between Serifos and Milos and on the west of Delos andParos. It has an area of 74 km² with a permanent population of 2.600 inhabitants.

The island's rich clay veins, sunny weather and temperature have made Sifnos a capital of pottery in the Aegean, with unique jars and pots that are a "trademark" of the island.Locally, 'Sifnios' was a variant word for potter.

Also, there are 360 churches in the island of SIfnos, as per the days of the year. More than any other island in Cyclades. Many churches and monasteries of the island are historical sites with great religious and architectural interest. 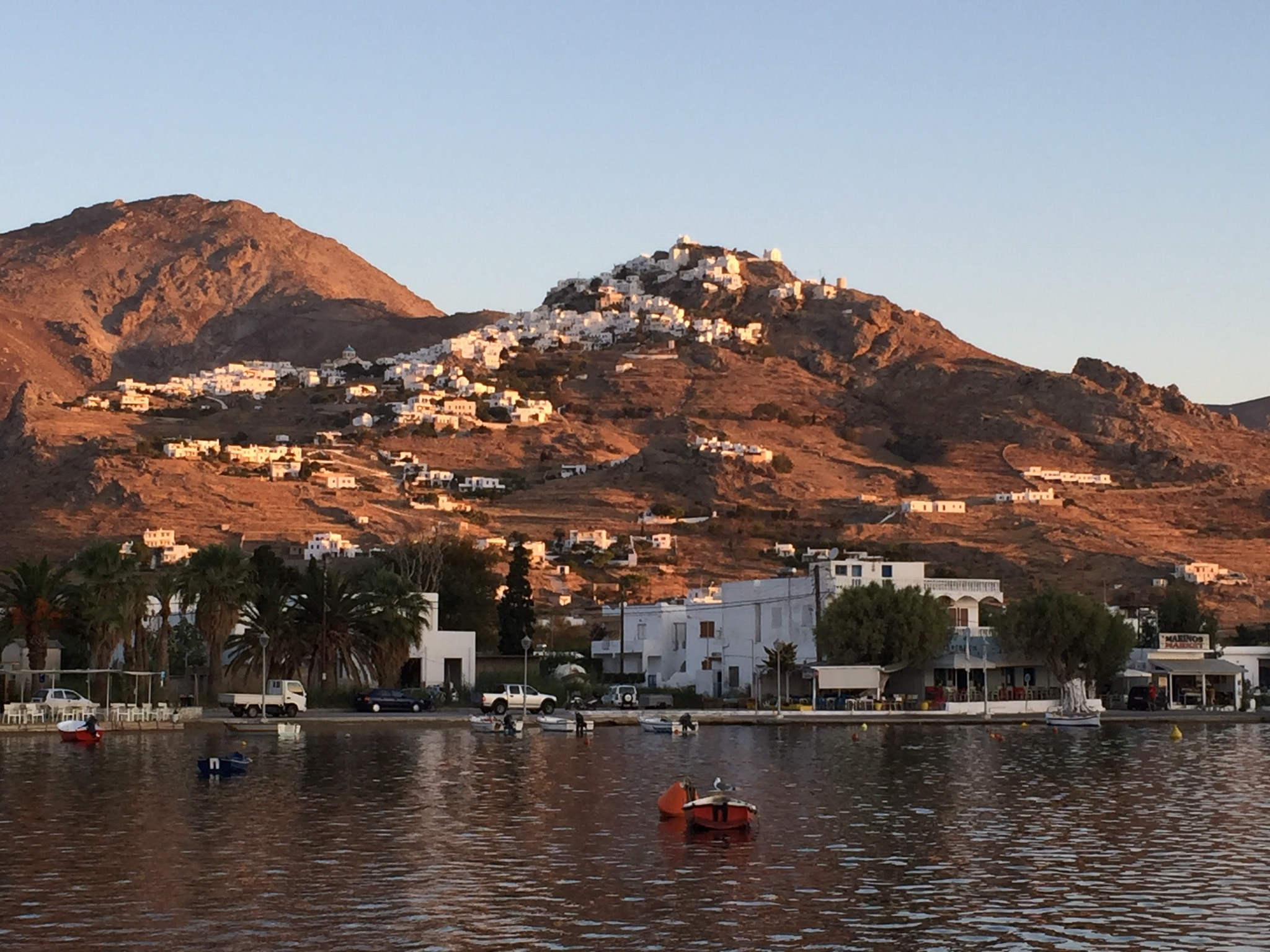 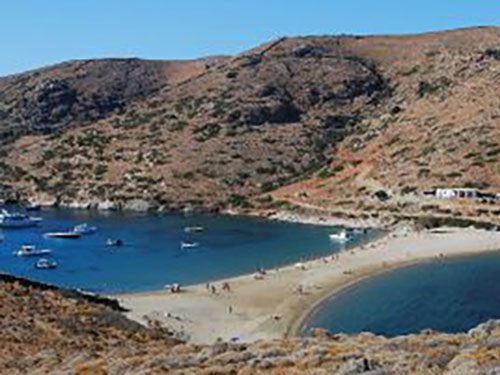 Kythnos, is a Greek island in the Western Cyclades between Kea and Serifos.

It is 100 km2 in area and has a coastline of about 62 mi. It has more than 70 beaches, many of which are still inaccessible by road. Of particular note is the crescent-shaped isthmus of fine sand at Kolona.

The island has two significant settlements, the village of Messaria or Kythnos, known locally as Chora, and the village of Dryopida , also known as Chorio.

Both villages are notable for their winding and often stepped streets, too narrow for vehicular traffic. The villages are very picturesque but in different architectural styles.

Chora has the more-typical flat roofs of the Cyclades, while Dryopida's rooftops are slanted and tiled.
Source: Wikipedia
[[[[]],[[]],"and"]]
1 Step 1
keyboard_arrow_leftPrevious
Nextkeyboard_arrow_right