Argosaronic Gulf is a term used to describe the adjacent Saronic Gulf and Argolic Gulf.

Saronic Gulf defines the eastern side of the Isthmus of Corinth and includes the islands of Aegina, Angistri, Salamis and Poros although many smaller islands and islets belong also to this area. The name Saronic comes from the mythological king Saron who while hunting was drowned in the sea, so the gulf between Attica and Argolis was, from this circumstance, called the Saronic Gulf.

It worth mentioning that at these waters, in the straits between Attic mainland and Salamis Island, took place in 480 BC, the battle of Salamis between an alliance of Greek city states and Persian Empire. The Greek fleet achieved a decisive victory. Some historians believe that a Persian victory would have blocked the development of ancient Greece and by extension western civilization and from this respect battle of Salamis is one of the most significant in human history.

Argolic Gulf on the other side is a gulf of the Aegean Sea off the east coast of Peloponnese. Its main port is Nafplio which was an important seaport during Middle Ages and the capital of the First Hellenic Republic (1823). At the entrance to the gulf is the picturesque and historic island of Spetses.

This archipelago includes also the islands of Hydra and Dokos which lie off the northeast tip of Peloponnese between Saronic and Argolic Gulf. A great advantage of Argosaronic Gulf in terms of sailing is that due to Attic mainland and Peloponnese mountains, is that it is partially protected from the summer North winds (known as “Meltemi”) that can reach Force 7 and above further to the east in Aegean islands. 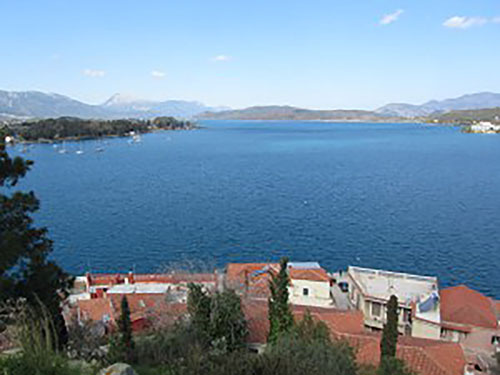 Poros is a small Greek island in the southern part of the Saronic Gulf, separated from the Peloponnese by a 200 m wide sea channel.

Its’ surface area is about 31 km² and it has approximately 3.800 inhabitants. Like other ports in the Saronic, it is a popular weekend destination for travellers all year round as it is easily accessible either by ship or by car from mainland.

As we approach the island from the northwest side and we turn left on the strait you will admire the picturesque town of Poros that has been declared protected settlement and is built in the shape of amphitheater over two hills.

Lush pine trees vegetation, crystal clear beaches, a lively waterfront adorned with shops, cozy cafes and restaurants will complete your very first impression for the island. Poros can be together quiet and cosmopolitan depending on your interests and places you choose to visit that’s why it attracts visitors from all age groups. 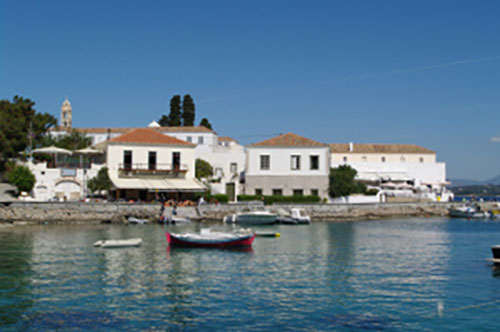 Spetses is the most remote of the Argo Saronic gulf islands located close to the Peloponnese coastline. It has a surface area of 150km ² and a population of approximately 4.500 residents.Spetses has a great naval tradition and together with Hydra and Psarra were the protagonists during the Greek War of Independence.

It was the first of the Greek islands that raised the flag of Revolution the morning of 3 April 1821. In addition to this, it’s very picturesque and local architecture together with pine trees gives the island a unique character.

An unusual aspect of Spetses is the absence of private automobiles in the town limits. Take a romantic trip around the island in horse-drawn carriages and admire the grand mansions adorning the narrow cobbled streets of the island.

Spetses was the basis for the island of Phraxos in John Fowles' 1965 novel "The Magus". 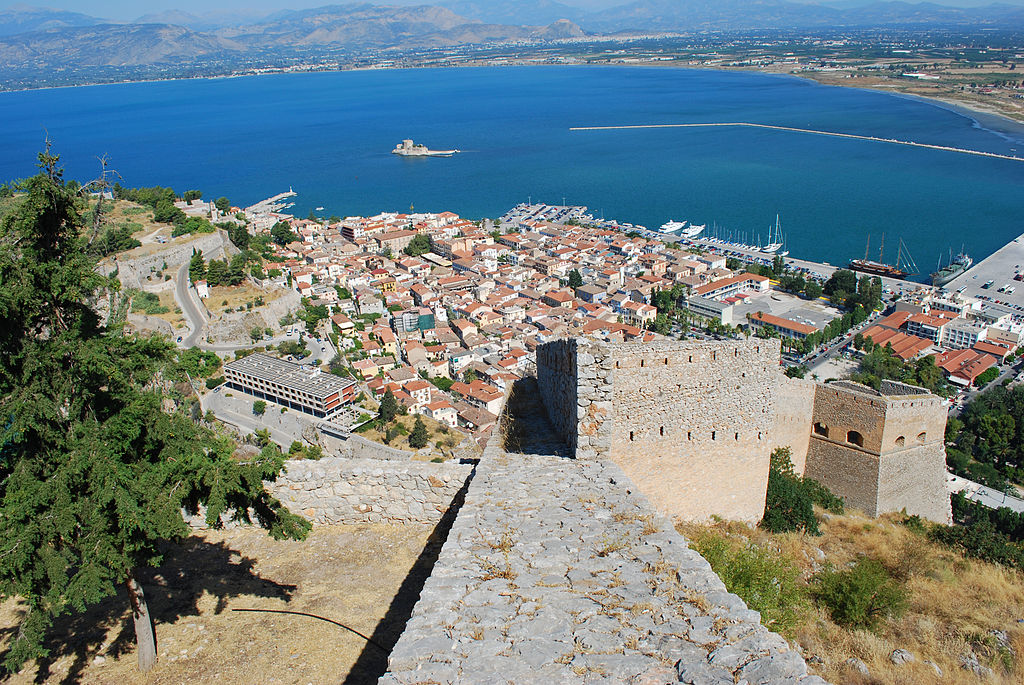 One of the most beautiful towns in the eastern Peloponnese as well as one of the most romantic cities all over Greece, Nafplio was the first capital of the newly born Greek state between 1823 and 1834.

Acronafplia is the oldest part of the city and until the thirteenth century, it was a town on its own. The arrival of the Venetians and the Franks transformed it into part of the town fortifications.

In 1685, the Venetians strengthened the city by building the castle of Palamidi, which was in fact the last major construction of the Venetian empire overseas.

You can admire Palamidi on a hill north of the old town. Nafplion maintains a traditional architectural style with many traditional-style colourful buildings and houses, partly influenced by the Venetians, because of the domination of 1338-1540.
Also, modern-era neoclassical buildings are also preserved, while the building of the National Bank of Greece is an example of Mycenaean Revival architecture. 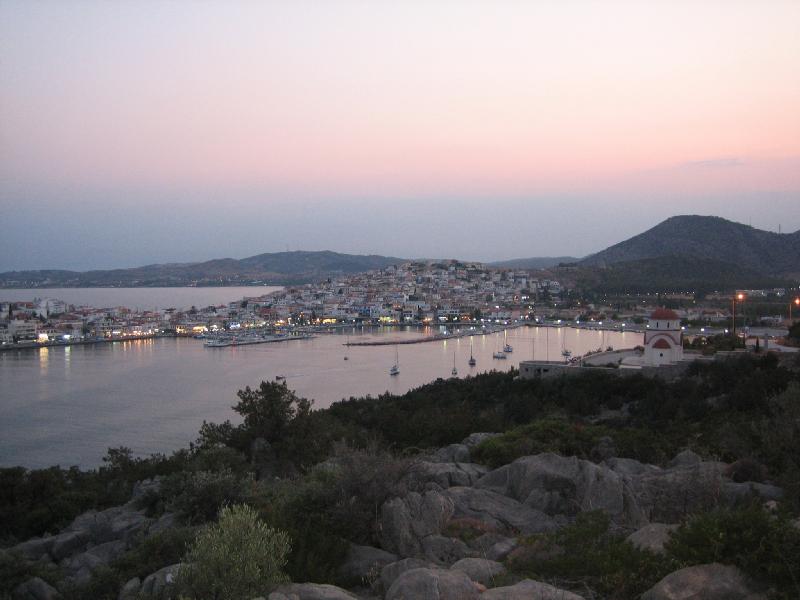 Ermioni,can be divided into three sections. The commercial Limani port and harbour is located on the Northern side, with the lively Mandrakia on the Southern side of the peninsula.

At the Eastern end of the town, is the archaeological pine-cladded forest area called the Bisti. Here one can enjoy leisurely walks at any time of the day, as there is plenty of shade, and visit the 5th Cen. BC temple of Athena, and other ancient, Byzantine and medieval monuments.

You can also swim in the clear blue sea, from the rocky coves along the Southern side of the Bisti, which overlook the islands of Dokos and Hydra.

The sea surrounds the town from three sides, giving the feel of being on an island, but without the possibility of being stranded in adverse weather conditions.
An important factor is that Ermioni has changed little over the years, both in its appearance and in continuing to keep the local civic, historic and religious festivals and traditions alive, especially to the growing younger generation. 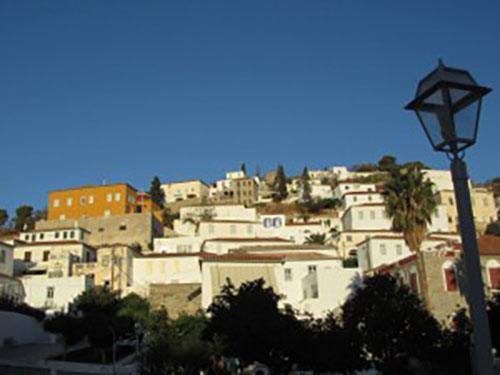 Hydra is located at southeast of Ermioni having a total area is 52km² and a population of 2.000 inhabitants. Hydra port, the main town, consists of a crescent-shaped harbor, around which you will find restaurants, shops, markets, and galleries. Steep stone streets lead up and outward from the harbor area. Most of the local residences, as well as the hostelries on the island, are located on these streets.As cars and motorcycles are not allowed by law, horses, mules and donkeys provide public transportationand give to the island of Hydra a touch of magic and a romantic mood. Hydra has a very strong naval history. In 19th century, it was home to 125 boats and 10,000 sailors. The mansions of the sea captains that ring the harbor are a testament to the prosperity that shipping brought to the island, which, at the time of the Greek Revolution, had 16,000 inhabitants.

Hydra Museum (next to ferry dock). Small but reasonably well-presented museum on the seafaring ways of the Hydriots and their disproportionate contributions to Greece's many wars.
Notable exhibits include the embalmed heart of Admiral Andreas Miaoulis and the sad story of patriot Kouroulis Michalis who, we are informed, "died of sorrow caused by the renewed enslavement of his homeland" in 1832.

Some old Hydriote mansions have been restored as museums illustrating the traditional life of Hydra's splendid past; they are usually listed on island maps available locally. 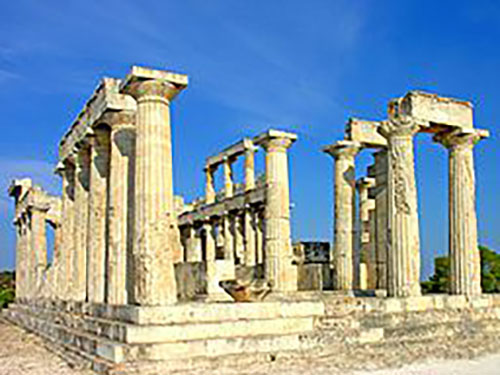 Aegina is one of the biggest islands in Saronic having a total area of 87km² and a population of approximately 7.500 inhabitants.

From 11/1/1827 until 3/10/1829 Aegina town was the temporary capital of the newly founded Greek state. It was during that period that impressive neoclassical mansions were built to house Governor’s headquarters that today are important tourist attractions.


The island has a great number of sights and natural beauties, highlight of which is the famous Aphea Temple. It forms in fact an equilateral triangle with the Parthenon and the Temple of Poseidon at Sounion, the so-called “holy triangle” of the antiquity.

The city of Aegina is the capital city of the island and it’s built amphitheatrical towards the sea.
The economic and social life is centralized on the coastal and the parallel roads. Walk in the narrow streets and see the traditional houses, the churches with the blue domes and the shops with the folk art.